Downconverter of the NB transponder

This function gave the board its name “AMSAT-DL DownConverter V3d”. The built-in mixer converts the signal to an amateur radio band so that it can be received with common transceivers or SSB receivers. The corresponding reference frequency at the LNB is automatically taken into account.

The pass-through gain from the LNB NB input to the receiver output is about +2dB.

A 10-position switch allows selection of the output frequency. The display refers to the old frequency of the CW beacon. This was originally at 10489.550 MHz and was moved 50 kHz down to 10489.500 Mhz when the narrowband transponder was extended (from 250 kHz to 500 kHz).

For position 8 and 9 (70cm) the standard 2m filter on the board must be bridged with a wire as short as possible.

Output frequency of the WB transponder

The attenuation from the LNB WB input to the DATV receiver output is about -2dB, because this is only a passive loop, i.e. there is no further conversion or amplification as with the NB input.

The frequency is referred to the center of the WB transponder range, this is 10495 MHz, and depends on the LNB frequency set by jumper: 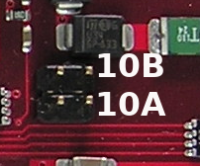 Usually the 24 MHz setting is used (no jumper). This fits best to many current LNBs incl. the already modified LNB offered by AMSAT-DL. Due to the reference frequency of 24 Mhz the IF is shifted above 1 GHz and can therefore be received for example with the Octagon SF8008 satellite receiver.

25 MHz is used only in conjunction with the minitiouner or software DATV receivers, although 24 MHz is also preferable here.

26 MHz is intended for older LNBs with a 27 MHz crystal.