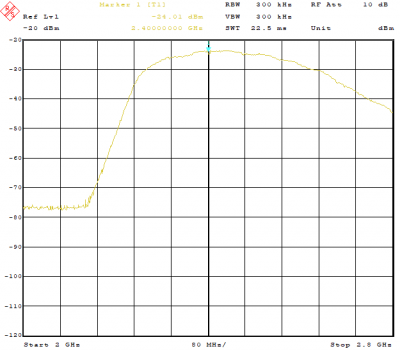 The two cascaded bandpass filters attenuate signals below 2120MHz by more than 55dB. In fact, the suppression is even higher, but the measurement was limited by the dynamic range of the measurement setup. If you use an upconverter with an intermediate frequency of 435MHz, the local oscillator is usually 1965MHz and the image frequency is 1530MHz. If the upconverter does not suppress these signals well, they will be sufficiently reduced in this PA at the latest.

When developing the amplifier, great importance was attached to good input matching in order to minimize possible repercussions on the exciter. The input adjustment is approx. 23dB.

Input adjustment S11 in the Smithchart 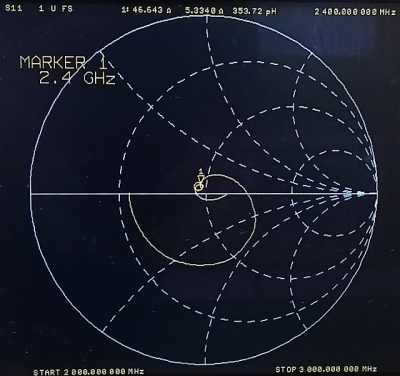 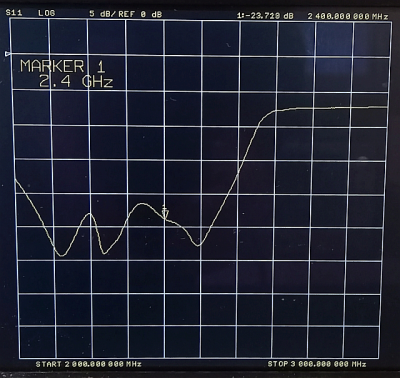 Finally, the measurement of gain, output power and current consumption of the test setup as a function of the input power. 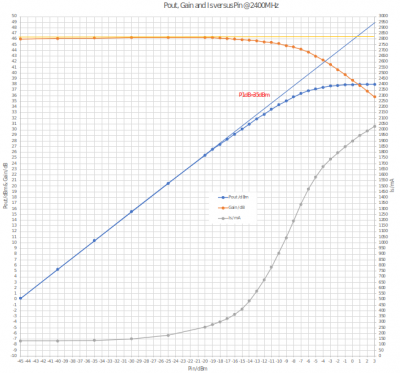 The amplifier assembly has a total gain of 46dB. The 1dB compression point is around 35dBm corresponding to 3.2W. The saturation power is over 6W and is already achieved with a control power of -1dBm. A maximum input power of + 3dBm should not be exceeded in order not to destroy the amplifier. With an input power of -10dBm, an output power of approx. 3W is generated. This low control power should be able to be delivered by all common SDRs such as ADALM-Pluto, LimeSDR-USB and LimeSDR-mini with a sufficiently clean signal.

Next measurements of the output spectrum were done, when using an ADALM-Pluto as a DVB-S2 DATV transmitter. The modulation was QPSK, the symbol rate was 500kS/s. The following screenshots were made with a measurement setup with a 20dB attenuator in front of the Spectrumanalyzer. Therefore, 20dB must be added to each of the displayed values.

Up to an output level of approx. 33dBm corresponding to 2W, the output spectrum is very good. The shoulders (spectrum regrowth) are down by more than 50dB: 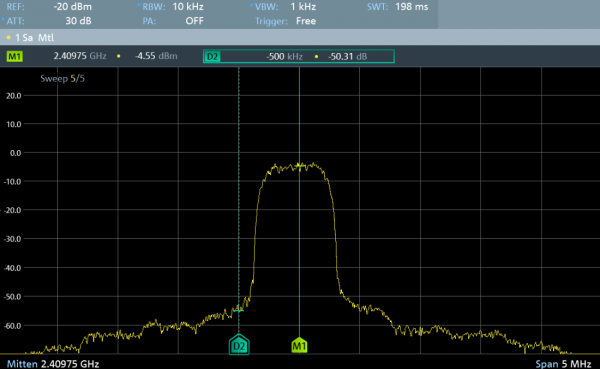 At an output power of approx. 33.9dBm corresponding to approx. 2.5W, the shoulders can be seen to some extent. 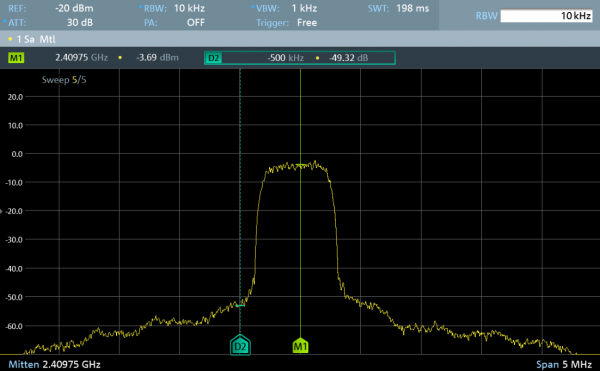 If the output level is increased further to 35.3dBm corresponding to 3.3W, the shoulders are only down by approx. 37dB. The output power should not be increased any further. Since another power amplifier is usually connected downstream, the 6W PA for DATV with QPSK modulation described here should be operated at a maximum output power of 2W. 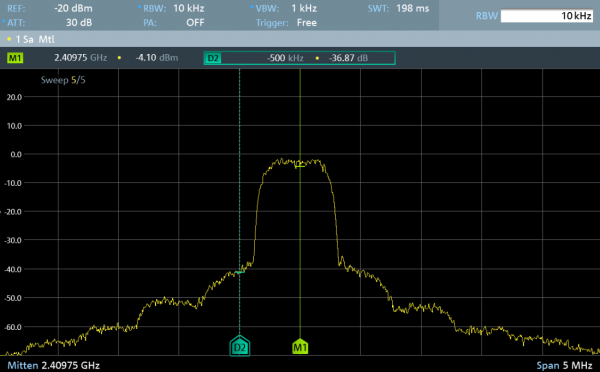 If it is not possible to ensure a good adjustment of the transmitting antenna at all times, it is advisable to insert an isolator at the output of the amplifier.